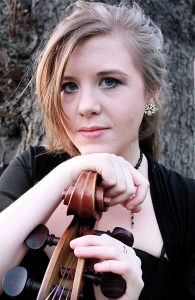 Norah Catherine O’Leary is a London based Irish cellist specialising in period instrument performance. Norah holds a first-class degree Masters of Performance of Early Music from the Sibelius Akatemia of the University of Fine Arts, Helsinki, where she studied under Louna Hosia and Markku Luolajan-Mikkola whilst undertaking mentoring projects with the Nordic Baroque Orchestra and Concerto Copenhagen.

She has since gone on to perform and record with London Early Opera and Signum records in their release of Handel’s Queens in July 2019. She has also regularly performed with various other groups such as the Finnish Baroque Orchestra, Camerata Kilkenny, Sestina Music, Cork Baroque Orchestra, Capella Scania, and Ensemble OrQuestra working with soloists and directors including Bridget Cunningham,  Peter Spissky, Peter Whelan, Dame Emma Kirkby, Mark Chambers, Laurence Cummings and Lars Ulrik Mortensen.

Norah is Co-Director of the East Cork Early Music Festival which takes place annually in Cork. Dates for 2019 are 10-14 October.

Any cookies that may not be particularly necessary for the website to function and is used specifically to collect user personal data via analytics, ads, other embedded contents are termed as non-necessary cookies. It is mandatory to procure user consent prior to running these cookies on your website.